The Road From Coorain 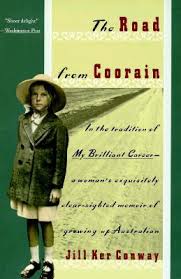 I had never heard of this autobiography by Jill Ker Conway until I found repeated references to it in The Book Group Book I read earlier this year, cropping up again and again as a recommended text. My mother read it first and pronounced it 'wonderful.' (One of the advantages of having your mother move in is having someone to swap and discuss books with.)

I took The Road from Coorain to Sydney with me last week, appropriately enough, as Jill Ker Conway spent her adolescence there, after her early rural childhood. Her family life was marked by tragedy, and her teenage years were not exactly happy ones, but Ker Conway's fierce intellect proved to be her eventual escape route. She is almost terrifyingly intelligent, observing and analysing every aspect of her  surroundings, 1950s Australian society, her troubled family and her own psychology with a cool, pitiless gaze. The book ends with her planned escape to academia in the US in her twenties, where she lived for the rest of her life, ruthlessly leaving her dependent mother behind.

I found a lot to relate to here (though not, mercifully, her anguished relationship with her mother). Highly recommended.
Posted by A latte beckons at 11:28 AM