A Tangle of Gold 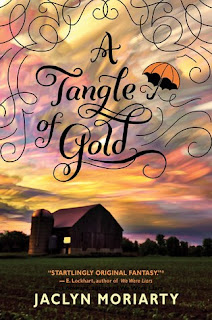 I have been eagerly awaiting A Tangle of Gold, the final volume in Jaclyn Moriarty's Colours of Madeleine trilogy and it did not disappoint! At the end of the second volume (The Cracks in the Kingdom), Princess Ko's deception had been uncovered, Elliot has been catapulted into the World, and the connections between the World and the Kingdom of Cello are surfacing in unexpected ways...

I can't say too much more without spoiling the resolution, but the final episode was utterly satisfying and magical. I have loved this rich and thrilling trilogy so much, I have writer's envy. (Though I don't think much of this last cover.: a very minor quibble...) Now I need to start reading again from the beginning, to pick up the clues that Moriarty has so skilfully seeded throughout the three books, and to start looking for cracks to Cello myself...  I would love to go there...

Rating: one deep, heartfelt sigh of contentment.
Posted by A latte beckons at 11:00 AM

Labels: A Corner of White, book response, The Cracks in the Kingdom