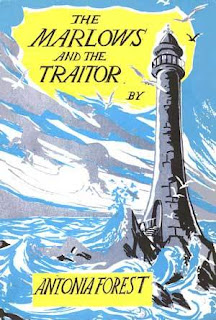 It's not even a year since I last read Antonia Forest's The Marlows and the Traitor! And yet I enjoyed it just as much, if not more, the second time around. There are many books that I would never even contemplate re-reading, however much I relished them. I once tried to re-read AS Byatt's Possession, a wonderful, rich novel that I adored. But trying to swallow it again, even a decade after the first time around, was just too much. I felt simultaneously daunted and bored. I could remember what was coming next just well enough to be put off continuing... and there were so many pages... I gave up.

Luckily The Marlows and the Traitor is a very different beast, though equally wonderful in its own way (much less ambitious, obviously). I read it with breaks between each chapter, during which I would scurry across to Trennels at LiveJournal, a forum for Antonia Forest fans, to follow the commentary from their MATT read-through from a couple of years ago. To be able to consume a book in the company, so to speak, of a group of witty, erudite, thoughtful and attentive fellow-readers, who mostly know all the Marlows books back to front and have a multitude of opinions, observations and personal head-canon to share, is one of the most blissful benefits of the internet age. I just dive in and wallow, luxuriously, like a hippo.

All this in preparation for the arrival, next month, of Falconer's Lure, the third volume in the series. I feel as excited as if an old and dear friend were coming to visit. So much catching up to do!