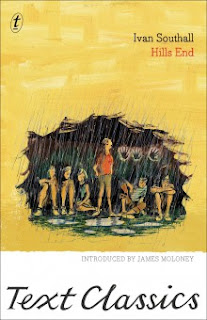 Goodness, I'm getting behind! I'm going to skip over Tove Jansson's The Moomins and the Great Flood, the junior fiction title for the Convent book group this month, just because it's a such a short little book and I read it on the Kindle, which compromised my appreciation of the illustrations, I think. But it was the first Moomin book, and deserves kudos just for that.

Moving briskly on, I'll talk about Hills End, which was the first Ivan Southall book I read as an adult, a couple of years ago, and which blew me away. In it, a group of children -- the oldest are about thirteen -- find themselves isolated in a flood-wrecked town, with no adults to take charge. (Our theme this month is Flood, if you hadn't guessed!) Will they survive, or be overwhelmed by the challenge? Of course, they rise to the situation magnificently, but not before almost going under.

These kids are very resourceful, brave and determined, but they are also realistically children. They bicker amongst themselves, think it's a great idea to wash in lemonade, decide to make sausages out of rotten meat, burn the stew and almost set the building on fire, are terrified of the dark and the eerie fog. But they are capable of more than they know, and their victory is fairly won.

I think this is my favourite Southall book. The balance between the characters' internal doubts and fears, and the gripping action, is just about perfect here. In Ash Road, the bushfire threat is so overwhelming that it leaves the protagonists little to do beyond mere survival; in To the Wild Sky and Bread and Honey, the interior lives of the characters take up so much room, there's no space for much to actually happen.

I thoroughly enjoyed this re-read, although I raced through it pretty swiftly!