The Magic and Mystery of Birds 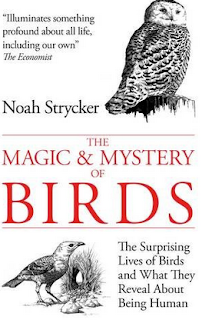 Found in the library. Full title: The Magic and Mystery of Birds: The Surprising Lives of Birds and What They Reveal About Being Human. Written by American Noah Strycker who seems to be something of a prodigal child in the world of birding, and last year broke a record for the most number of birds ever spotted in a single year (about 6000, I think).

I was in the mood to learn something and this non-fiction book was easy to digest. It read like a collection of magazine articles (not a bad thing) on various topics, bouncing off weirdnesses in bird behaviour into discussions on human psychology, physics, love, game theory and a dozen other topics.

Highlights include: a link to an amazing Youtube video of a flock of starlings in flight at sunset (look up 'murmuration' and check it out for yourself); the information that vulture poo is completely sterile (because they live off rotting meat, their stomachs have to handle any bacteria -- they can even process anthrax); albatrosses live 95% of their lives on the wing, gliding effortlessly over the world's oceans; the only species in the world who dance to music are humans, elephants and parrots. And lots of other bizarre and unexpected facts.

It wasn't what I'd call a deep read, but Stryker succeeds in communicating his enthusiasm for his life's passion, and intriguing the reader too.