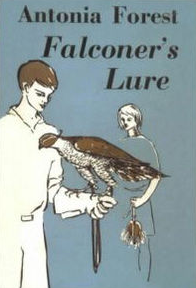 I pre-ordered my reprint of Antonia Forest's third volume in her Marlow series, Falconer's Lure, back in February and it FINALLY arrived two days ago -- I had been checking the letterbox several times a day! (This is not a crack at Girls Gone By Publishers or Australia Post, just a comment on my own impatience...)

Falconer's Lure was the last missing link in my collection of Marlow books. My high school library had a copy and I could dimly remember reading it, but I hadn't got my hands on a copy for a good thirty years. I awarded myself a day off yesterday and read it straight through in a single sitting. Would it stand up to expectations? Reader, it did.

Here were characters who have now become familiar, introduced for the first time (Patrick Merrick, Sprog the merlin). Here was Trennels, the Marlow ancestral home, where all the subsequent 'home' books are set. Here is a children's book which meditates on loss and grief, while being ostensibly concerned with the events of a traditional summer holiday - gymkhana, regatta, singing competition - and the less conventional activity of falconry.

There is also some of the most beautiful, restrained writing I've encountered. Here is a favourite passage:

The sun came down in slanting lines through the trees, and made a fishnet of light on the bed of the stream. It was doing that when Nicola and Peter first met. It was still doing so, five minutes later. But by then Peter had managed to tell her that Cousin Jon had been killed when the plane crashed, and that made everything look quite different.