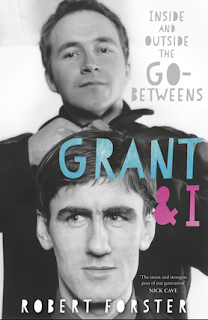 Despite (because of?) working for international music companies for more than a decade, I am not really a music person. I very rarely listen to music these days, and when I do, it's always an old favourite album and not anything new.

The exception to this rule is the wonderful mix discs made for us by our friend David (through whom both Michael and I got our music jobs...). And it was David who gave me Robert Forster's Grant and I for my birthday, knowing that one of the albums I return to time and again, the soundtrack of my twenties, is the Go-Betweens' 16 Lovers Lane.

This is the story of a band, a musical journey, and most of all, a friendship. Grant McLennan and Robert Forster found each other as sensitive outsiders at university in Brisbane, back when Queensland was a black hole ruled by Joh Bjelke-Peterson. Robert taught Grant how to play guitar; Grant introduced Robert to arthouse cinema. The union of two singer-songwriters gave their band an unconventional structure; it became both a strength and a weakness, as the Go-Betweens fought for creative and commercial success in the UK, Europe, the US and at home in Australia -- two steps up the ladder, then another slide down. The Go-Betweens never became 'big,' but they certainly gathered a devoted following, despite Grant and Robert splitting the band and going their separate ways for a decade before coming together again.

'There's bad blood between us' is a line from 16 Lovers Lane, before it all fell apart, but it sums up a period when the long hard slog of being in a not-quite-successful enough band and the tensions of personalities and relationships took their toll. At different times, Robert was going out with the drummer, Lindy, and Grant was going out with Amanda, the violinist, and though at times love fuelled the music, there were times when this history proved destructive.

I loved how Forster describes the memory of writing a strong song as setting off a 'flare' in his mind, illuminating a particular room at a particular moment in time: the carpet, the way the light fell, a half-open door, Lindy applying makeup in the bathroom.

Grant and I is a wonderful, moving story of a creative partnership, and it's sent me searching for all the music, both from the Go-Betweens and from McLennan and Forster's solo work, that I missed along the way.
Posted by A latte beckons at 10:35 AM