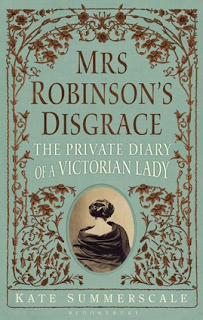 I relished Kate Summerscale's previous non-fiction exploration of a Victorian-era crime, The Suspicions of Mr Whicher, an absorbing and sometimes shocking account of one of the first modern-style murder investigations.

Mrs Robinson's Disgrace is also an examination of a Victorian scandal, but this time based in the newly-minted divorce courts rather than the Old Bailey. Isabella Robinson is unhappily married, bored and depressed. She consoles herself by writing in her private diary, recounting her attraction to various men and ultimately, her intimacy with one of them. Alas, while Isabella is ill and feverish, her husband discovers her diary, reads it with mounting rage, and demands a divorce for adultery. The only evidence is her diary, but can it be trusted? Or did Isabella, as her alleged paramour insists, invent the whole story?

Based on court records and other research, Mrs Robinson's Disgrace gives Summerscale the opportunity to explore all kinds of threads concerned with female sexuality, Victorian morality, truth and fiction, the romantic imagination, marital cruelty, and the emergence of scientific, rational approach to sexual desire.

All this is very interesting, but unfortunately I found Isabella Robinson, though intelligent and dealt a rotten hand in husbands, rather wearing company. She was rightly outraged that her husband had violated the privacy of her journal. Some words are not meant to be shared with others. Alas, Isabella's diary, like so many unedited diaries, is repetitive, self-serving, over-written, exaggerated and rather dull. That doesn't mean it wasn't valuable for her to write it; my own diaries, more than a hundred years later, were pretty similar! But I would shudder if they were shared with the general public, and I fear Isabella Robinson would probably feel the same way.