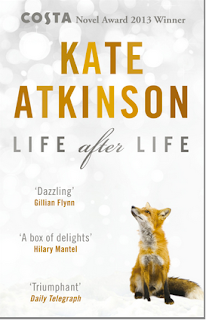 Every novel I've read by Kate Atkinson has been a treat*, and Life After Life is no exception. A perfect middle-brow read, it teems with ideas and juicy story-lines, as well as a killer conceit. I had a lot of trouble putting this novel down and raced through its 600 pages in a couple of days.

What if you had the chance to live your life over and over, until you finally got it right? Ursula Todd is born in 1910 -- and dies, the cord wrapped round her neck. Ursula Todd is born in 1910 -- and lives, because the doctor arrives just in time to save her. We see Ursula's childhood and later life play out, with each forking path of chance explored. Sometimes these paths reconnect, sometimes they lead to wildly divergent outcomes. One of Ursula's lives takes place in wartime Germany; in another, she marries an abusive conman. Her adulthood takes place in the London Blitz -- plenty of opportunities for untimely death there. It's a measure of Atkinson's skill that the necessary repetitions and backtracks inherent in her scheme don't become tedious; half the fun is picking out the variations from the life before.

It hadn't occurred to me until I read a review this morning that Atkinson might be playing with the whole idea of the author's power to play God -- to bestow good fortune or many kinds of suffering. The character of Ursula herself seems to possess a growing awareness of her cyclical journey -- in one life in particular, she is actually calculating her own destiny. But then there is a coda that doesn't make sense in that narrative, planting doubts about whether this is really Ursula's "true purpose"; is there any such thing?

Characters talk of reincarnation, but Ursula's experience is not quite that; she lives the same life over and over, not one life after another in different bodies. But this book certainly fleshes out all those delicious or terrifying 'what if' ruminations that all of us indulge in from time to time.

* though I did feel that the Jackson Brodie series ran out of steam slightly towards the end.