Shadows of the Workhouse 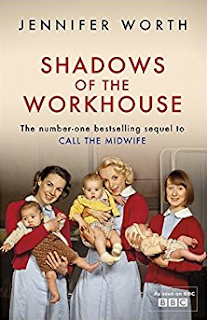 Jennifer Worth's second book, Shadows of the Workhouse, was her follow-up to the immensely popular Call the Midwife, and this particular cover is obviously trying to trade on the success of the BBC series. However, for this volume, it's actually quite misleading! There is not ONE baby or birth scene in Shadows of the Workhouse, despite the smiling midwives and bonny babes pictured on the front.

There was more to Worth's work in London's Poplar in the 1950s than delivering babies, and in her second book she tells the stories of people she visited as a home nurse (intercut with a poignant episode involving Sister Monica Joan, a ninety year old nun accused of jewellery theft). Worth departs from her personal memories (which is why I hesitate to call this book a memoir) to narrate the experiences of a brother and sister who grew up in the grim environment of the workhouse before rediscovering one another in their teens, and an old soldier with whom she forms a touching bond.

If the popularity of Call the Midwife shines a light on this forgotten and horrific element of social history, that can only be a good thing. In some ways the shadows of the workhouse still fall on social policy -- the notion that poverty is a sign of moral failing or laziness, the disregard for human dignity, the ignorance and disdain of those more fortunate, have all crept back into public discourse. Shadows of the Workhouse is a good reminder of where that path ultimately leads.