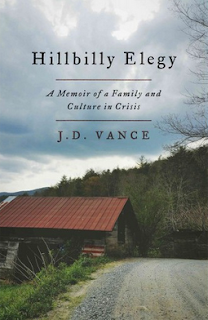 I borrowed JD Vance's best-selling Hillbilly Elegy from a friend (thanks, Juzzy!) after seeing numerous recommendations online, and indeed the cover of the edition I read is thick with gushing praise, including the claim that it 'explains Brexit and the rise of Trump.'

That's a big call for a fairly little book, and one I don't think is entirely justified. It's also, as far as I can tell, not the intention of the writer.

JD Vance is a young writer, only about thirty, but he tells his story with clarity, insight and keen  awareness of the connections between the personal and the political. He grew up in Ohio, but from 'hillbilly' stock: fiercely loyal, resentful, a law unto themselves. JD's childhood was marred by domestic violence, parental substance abuse and instability. He was saved by the unstinting love and hard work demanded by his grandparents, which saw him eventually graduate in Law from Yale. This is a postcard from the heart of Trump's America, though as Vance is a conservative at heart, he ultimately lays blame for America's malaise on a lack of personal discipline and responsibility rather than systemic political failures.

Some parts of Vance's story were utterly foreign to my own life -- screaming parental fights, wild spending on showy consumer goods, using a pay-day lender to survive till the next pay cheque. But other parts resonated with my own experience. Vance ends up at Yale and realises he has entered another world, one where he doesn't understand the rules of the game.

He was one step ahead of me when I landed at Melbourne University Law School -- I didn't even realise there was a game. Networking, making contacts, befriending lecturers who might give you a recommendation -- I just didn't know that this was part of what university was supposed to give you. But to play the game, you have to understand that the game exists. I was totally clueless. But like Vance, I was the first member of my family to attend university; there was no one to tell me how things worked. It's not enough just to gain access to the institutions of power (interestingly, I'm also now reading about Elena's experience of the same situation in Elena Ferrante's Those Who Leave and Those Who Stay). You also need to navigate the unseen rituals, dress properly, speak properly to the right people, ingratiate yourself, submit articles to the journals that count. And nobody explains that stuff: you're supposed to just know. These are the unseen barriers that shut off opportunities to the poor, even if they scrape into the bastions of the elite.