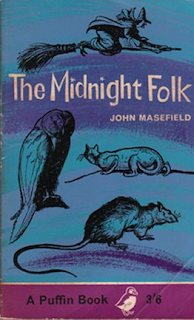 The copy of John Masefield's The Midnight Folk that I found secondhand was published in 1957 -- it cost 3/6! -- but the book was first published in 1927. I picked it up because Susan Green had mentioned it as a favourite childhood book, and during the Dark Is Rising twitter read-through, several participants talked about The Midnight Folk and its sequel, The Box of Delights, as formative fantasy texts.

The Midnight Folk is a strange little book -- not so little, actually, it's over 200 pages in fairly small font. Young Kay Harker embarks on a quest for the lost treasure entrusted to his ancestor, Captain Harker, which has been stolen and mislaid several times over, and in so doing he tangles with witches and talking animals, walks into portraits and meets many peculiar characters, human and non-human.

Several times I was reminded of other books, which shows how influential this novel has been. Kay tries on bat wings and otter skin which enables him to fly and to swim, which reminded me of the Wart's educational experiences in TH White's The Book of Merlyn. The witches, and especially Mrs Pouncer with her wax face, foreshadowed Roald Dahl's witches. The talking portraits took me straight to Hogwarts.

I'm not sure this book would appeal to a modern audience, though it would make a great read-aloud -- there are heaps of opportunities for funny voices, and it's actually pretty humorous, though I suspect children might need to be led through some of the jokes. I found the whole treasure plot quite confusing, though I must admit pirates and treasure aren't really my cup of tea. I'm glad I've read it though, and I will keep a look out for Kay's further adventures in The Box of Delights.