The Nargun and the Stars 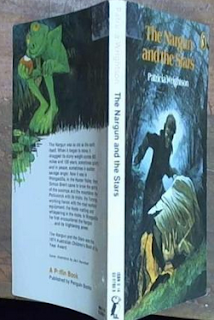 Patricia Wrightson's award-winning The Nargun and the Stars was first published in 1974 and has been reprinted many times, with many different covers. The one pictured above, the one I own, is about the ugliest version I've come across. Ah, well.

I thought I had already read this book, but it seemed unfamiliar. Wrightson was one of the first Australian writers to incorporate Indigenous myth and stories into her works for children -- she recognised that instead of European elves and fairies, this land had its own sprites and spirits: the Turong tree-spirits, the mischievous Potkoorok, the menacing rock-creature, the Nargun, the little cavern-dwelling Nyols.

Patricia Wrightson was initially acclaimed for popularising a distinctly and proudly Australian form of fantasy writing; later, she was criticised for appropriating Aboriginal cultural material for her own gain. Certainly if Wrightson were writing today, she would need to consider issues of consultation, sensitivity, and cultural dispossession. But back in the 1970s, it was a worthy project to introduce non-Aboriginal Australian kids to the rich heritage of Indigenous legend.

Wrightson always tried to distinguish between magical 'folk' creatures, which she felt comfortable to write about, like the ones in this book, and sacred figures like the creator spirits, which she was careful to avoid. However, there is an argument that in Aboriginal culture, this is actually a meaningless distinction -- everything is sacred to some degree, and it's disrespectful to describe the Potkoorok, for example, skipping around his swamp and gleefully playing tricks on the Boy.

One aspect of this book that definitely makes me uneasy is the complete absence of 'the tribes' who once populated this country. The spirits remain, but the people have vanished -- or been obliterated. In later books, Wrightson would address this more directly, but in The Nargun and the Stars, it is a glaring gap in the narrative.