A Writing Life: Helen Garner and Her Work 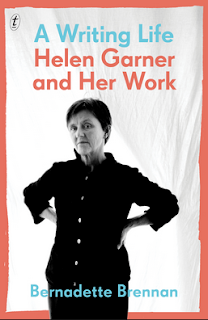 As a long-time deep admirer of Helen Garner's work, I was very excited to see Bernadette Brennan's A Writing Life pop up on Brotherhood Books. Why do people get rid of these amazing books? Lucky for me that they do.

A Writing Life is not a conventional author biography. Rather, it examines Garner's body of work, volume by volume, and relates each publication to events in Helen's life at the time. Though Brennan had access to journals and letters, much remains private -- though Garner has always admitted that the substance of her own life has provided the material for her writing, the line between fact and fiction often blurred. From the seminal Monkey Grip (the famous Monkey Grip house is just opposite my daughter's school, where Garner herself was a teacher for a time), through largely autobiographical short stories and novellas, to her later non-fiction examining questions of justice and responsibility (Joe Cinque's Consolation, This House of Grief), Helen Garner has mapped her own relationship to a wider world and wrestled with the same questions through a long and productive life.

This survey of Garner's work has revealed the gaps in my reading -- incredibly, I think I've managed to miss a handful of early stories and essays. And it's also fired me to reread some books that I might understand better for having read Brennan's insightful observations and analysis. The controversial The First Stone will, I think, make more sense to me now. As soon as I get a chance, I'll be returning to it.