A Corner of White 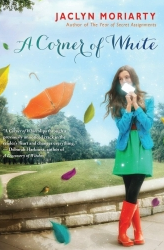 Was it cheating for me to add A Corner of White by Jaclyn Moriarty to the list of Umbrella books for this month? Almost certainly. While Madeleine's tangerine umbrella is pictured on the cover, it's only mentioned once, and (spoilers) it doesn't have any part in the story.

But I love A Corner of White, as well as its sequels in the Colours of Madeleine trilogy, The Cracks in the Kingdom and A Tangle of Gold, so I invented a spurious excuse to read it again. This was the first Jaclyn Moriarty I'd ever read, and her fresh take on fantasy was delightful. Now I know what's coming, I can appreciate the subtle clues and clever plotting that will pay off later in the series.

In fact, the two words I'd use to describe this book are whimsical and clever. Whimsical can be a loaded adjective, but the whimsy here is logical, fresh and funny, with a touch of grit that keeps the story grounded. For all its shifting seasons, parallel worlds and travelling princesses, A Corner of White is really about grief, upheaval and loss.

I suspect this book won't be to everyone's taste, but I can't wait to find out what the rest of the group will make of it.