Diary of a Baby 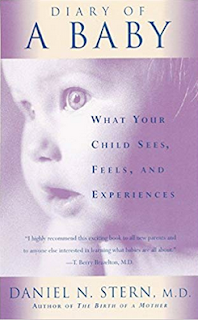 Daniel Stern's 1990 book Diary of a Baby also falls into the Fun read category. This slim volume, which was published together with a companion book, The Birth of a Mother (which sounds less fun, to be honest), purports to be snapshots from the diary of an infant, from six weeks up to four years old.

The earliest entries imagine the interaction of a very young infant with a patch of sunlight on his wall, the pure sensory and emotional experience of hunger and feeding. Then a slightly older baby delights in simple mirroring interaction with his mother, then is overwhelmed when she takes the game too far. The book traces similar everyday experiences until we end with a four year old who is able to tell his own story.

The somewhat poetic 'diary' extracts are interposed with science and observations from Stern, an experienced parent and expert on infant development. I wouldn't be surprised if the science has progressed in the thirty years since this book was written, but I admire the imaginative effort that has gone into recreating the baby's own consciousness. I would recommend this to a new parent faced with one of those mysterious little creatures who obviously feel so intensely but can tell us so little.