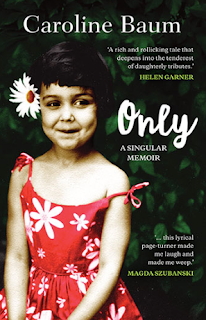 Caroline Baum has been a familiar face from the ABC, where she worked for many years as a journalist and presenter. Only: A Singular Memoir is a family story, which she describes as a triangle consisting of herself, her father and her mother, with a struggle to pull to the top spot.

Baum's family history is an extraordinary one. Her French mother had a dramatically tragic background; her Viennese Jewish father escaped the Nazis via Kindertransport to England, but lost his entire extended family in the Holocaust. Not surprisingly, these losses permanently marked Baum's parents, with her father an especially forceful personality with a lot to prove. His love of luxury, money, high quality clothes and cars, meticulously organised travel, made his daughter's childhood in some ways highly privileged; but she also suffered the crushing burden of being the only child -- treasured, but expected to be perfect. It's not really until the second part of the book, when Caroline's father's health fails, that she truly feels the pressure of singleness. Suddenly the whole responsibility for caring for both parents lands squarely on her shoulders.

There was much in this memoir that resonated with me. Though I'm not an only child, my sister has an intellectual disability, so for practical purposes I'm the only one who can take charge when things go wrong. And they did go spectacularly wrong a few years ago, when my father had a debilitating stroke. Overnight, our roles were reversed; instead of running to my parents for support and refuge, suddenly they were both dependent on me (and so was my sister). Luckily I didn't have to deal with it alone; my marvellous husband shouldered a huge part of the task. But I understood what Caroline Baum was going through, especially when she was running around London trying to find suitable accommodation for her father. Many secrets came tumbling out in the aftermath of her father's illness.

This was a thoughtful, moving and fascinating memoir. Baum says that three never felt like enough to make up a family, and it's true that the bonds between the three of them were intense and super-charged with emotion. I thoroughly enjoyed Only.
Posted by A latte beckons at 12:18 PM