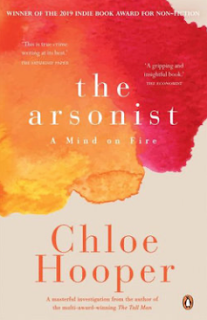 I was reminded about Chloe Hooper's The Arsonist when I woke up in the night and heard the author talking about the book on the radio (I hear a lot of interesting things via night radio).

The Arsonist has won multiple awards and deservedly so. Although it centres around the Black Saturday bushfires of 2009, it was uncomfortably relevant during this past horrific Australian summer (which is not over yet, despite the blessed downpours). This is the story of Brendan Sokaluk, who was found guilty of deliberately lighting one of those cataclysmic Black Saturday fires, but it is also a story about the struggling rural community where he lived, a power station town in the Latrobe Valley; about the fires themselves, and the apocalypse that killed so many people. It is searing to read about the nightmare the those people endured, and you begin to think that anyone who deliberately caused that suffering and devastation must deserve the harshest possible punishment.

And yet. Things are rarely simple in a Chloe Hooper book. Sokaluk became a figure of terror because of what he'd done, yet Hooper shows that he is also deeply pathetic. Possibly autistic, definitely intellectually disabled, Brendan moves in a small world that he has trouble understanding, with people who find him irritating. His only true friend is his dog, who loves him without judgement. Like many people with ID, Brendan may have trouble grasping the complexities of social interaction, but he is expert at forming and holding onto grudges, and knowing when he's being bullied; he has been bullied his whole life.

Having said that, it's hard to feel too much sympathy for Sokaluk, and it's impossible to know if he fully understood the consequences of his behaviour when he lit that fire. Was he a cunning, manipulative criminal, or one of life's victims who got out of his depth? It's Hooper's skill that lets the reader see that both options are probably true.
Posted by A latte beckons at 11:38 AM