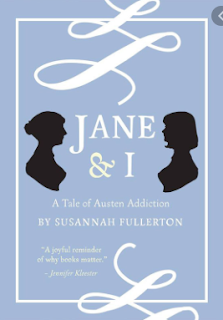 Jane and I: A Tale of Austen Addiction by Susannah Fullerton was an impulse buy on the Kindle after my friend Suzanne mentioned that she'd been reading it in a comment on my Mansfield Park post. See how one thing leads to another? Apparently Susannah Fullerton shares my admiration for the much-maligned Mansfield Park. That was enough to get me clicking the BUY button (also it was only $3!)

In truth, Jane and I is a very slender but engaging memoir, containing much more about Fullerton than about Austen. It traces Fullerton's early introduction to the works of Jane Austen, her growing obsession, membership of Austen appreciation societies in Australia and abroad, and ultimately the way in which she has managed to create a whole career out of her love for Austen and her novels -- as a writer of books like A Dance with Jane Austen, Jane Austen and Crime and Happily Ever After: Celebrating Pride and Prejudice; as a literary tour guide; and a popular lecturer on literary subjects (not just Austen).

It's incredible to reflect that Jane Austen is so enduringly popular that she makes such a career not just possible, but profitable! I'm sure Jane herself would be astonished. But I know if I come across any of those other Fullerton-penned Austen celebration books, I won't be able to resist.