This is the only image I could find of my edition of Persuasion, my favourite Jane Austen novel. It's a very dull cover, it's not surprising that it was replaced, but it does show a view of the Cobb at Lyme Regis, the scene of the most dramatic incident in the book, where Louisa Mulgrave falls and injures her head.

I may be one of the few people in the world to visit the Cobb without thinking of poor Louisa, because I hadn't yet read Persuasion (however I did think of Meryl Streep in The French Lieutenant's Woman, also set in Lyme. Here she is, looking suitably melodramatic: 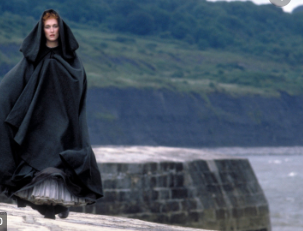 )
Anyway, the reason I was in Lyme with my parents was because my father went to boarding school there. He showed us the secret spot in the woods where they used to sneak off and smoke, and we were able to explore the corridors filled with glass cases of stuffed birds -- it was very creepy!
None of which has anything to do with Persuasion, but it may explain why I approached it with a feeling of proprietorship from the get-go, and I was quickly drawn in by quiet, uncomplaining Anne Elliot, disappointed in love -- no, cheated out of love by her meddlesome friends and relatives, who are some of the most unlikeable characters in Jane Austen's universe. But it's the most satisfying of Cinderella stories, as Anne's patience and steadfastness is ultimately rewarded by a man whose own loyalty shows that he deserves her. Although I have my doubts that in real life, Captain Wentworth would have remained so faithful.
Persuasion is a very comforting book for troubled times, but its razor-sharp observations save it from sentimentality.