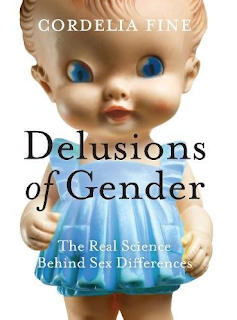 Huzzah, a science book that's fun to read as well as being knowledgeable and scholarly! I enjoyed this book so much. Cordelia Fine smashes through all those pop-psych books like Men Are From Mars, Women Are From Venus, and Why Men Can't Find Butter in the Fridge and Women Can't Mend Taps, or whatever they're called (I must confess here that in a weak moment I may have picked up a couple of these titles from the library book sale to amuse myself...)

Anyway, Fine completely dismantles the so-called 'science' behind the claims that men's and women's brains are fundamentally different, demonstrating that any observable differences in behaviour are much more likely to be a product of social and environmental factors than genetic 'hard-wiring' (which isn't even a thing).

I do worry, a lot, that even in the last couple of decades, the gender boxes seem to be becoming more and more rigid, especially for kids and even babies. I had no desire to dress my girls in pink and frills (they did have a couple of princess dresses). I didn't go out of my way to raise them in a gender-neutral way (something Fine believes is basically impossible anyway, as even tiny children swim in a soup of culturally mandated assumptions and expectations). I now have one quite girly girl, who has to show me how to put on makeup properly, and one who hasn't worn a skirt since Grade 2. They both have friends who are trans and non-binary, which is of course completely fine; but I do feel it's a shame that society seems not to offer a wider, more elastic range of ways of being male and female in the world. I look back at myself when I was eleven or twelve -- not pretty, bookish, not interested in fashion or pop music or celebrities or handbags -- and I wonder if that girl was growing up today, if she might not start to question whether she was really meant to be a woman? I don't know, I don't know.