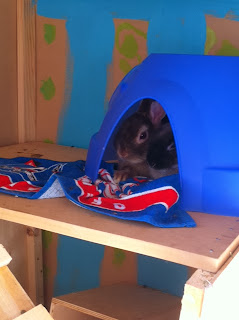 In a piece of heavy-handed symbolism that you could never get away with in a work of fiction, my daughter's childhood rabbit has died in the very week that she's moving out of home.

Maya lived with us for almost eight years, a pretty good innings for a Netherland Dwarf. He was a pretty little rabbit, so cute when he cleaned his face with his paws. He wasn't much of a cuddler, but he would hop over eagerly at the sound of the fridge opening, and allow us to pat his soft brown fur. Originally he and his brother Momo lived in Al's room, but they kept her awake at night -- especially Maya, who would naughtily leap from his enclosure and hop around her room -- so a few years ago we moved his hutch into the living room, where he lived ever since. (Momo died in mysterious circumstances quite early on. I don't want to speak ill of a departed rabbit, but we did wonder...)

We whinged freely about having to clean out his stinky enclosure, about cutting his nails, and having to feed him with a syringe when he got sick a couple of years ago. But he was part of our family, and yesterday we all had a cry when we said goodbye.