One Day I'll Remember This 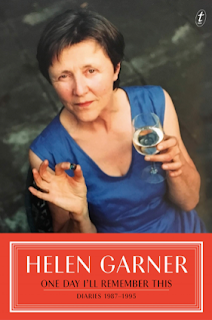 Reading Helen Garner's diaries is such a treat. I had to ration myself to twenty pages at a time or I would  have gobbled up this volume in a single sitting. One Day I'll Remember This covers the years between 1987 and 1995, when I was in my twenties: living in share houses, going to uni, travelling overseas, single.

Garner was negotiating a very different stage of life: mired in an affair with a married man ('V'), then marrying him herself; moving to Sydney to be with him; working on the screenplay of The Last Days of Chez Nous, about the breakdown of her own previous marriage, and writing the 'angel' novel, Cosmo Cosmolino. This volume of the diaries ends with the publication of the hugely controversial non-fiction book, The First Stone, about allegations of sexual assault at Ormond College. This was the book that has poisoned her reputation with young feminists (though not with me), as she was seen to be way too sympathetic to the man in the case. I'm guessing most of the fallout will appear in Volume 3.

Garner has always grappled with relations between men and women, in a way that might seem old-fashioned and almost deterministic to a younger generation. I was excited to read one entry where V recounts an anecdote about Stravinsky: that when the great composer was working on a piece, he would demand that his wife and children remain absolutely silent at lunch, so as not to wreck his mental concentration. Later, this story is repeated at a dinner with friends (including Garner's writer friend 'E'). All the men are admiring or at least understanding of Stravinsky's demands -- this is what Art requires. All the women are up in arms -- why didn't Stravinsky eat his lunch in his room, on a tray? How dare he impose his own whims on his whole family in this arrogant way? Why couldn't he prepare his own damn lunch? It goes without saying that a female artist would find it extremely difficult to impose herself on the rest of her household in this way.

The reason I was thrilled to read about this discussion is that I had recently bought (to re-read) the book Stravinsky's Lunch by Drusilla Modjeska (who is surely 'E'), who also tells the same anecdote in the introduction and says it came up at a dinner with friends. Stravinsky's Lunch tells the story of two Australian women artists and the struggles they faced in carving out space for their work -- a struggle that most female creatives must still grapple with.

Reading about Garner's own difficulties with 'V' made my blood boil. He assumes that she will leave their tiny flat when he is working, even if she is also writing. She finds herself tiptoeing around his feelings, yet he accuses her of being 'moody' and 'hypersensitive.' I wanted to give him a slap and give Helen her own flat.

The saddest episode concerns a long-standing friendship, with R and O, which is wrecked after Garner hurts 'O' by using him as a character in Cosmo Cosmolino. When the volume ends, a tentative rapprochement seems to be taking place; I hope the friendship can be rescued. Overall, these mid-life diaries seem to be wrestling with the price of making art, the cost in independence, in love and friendship, in money, in time. The costs are huge, and yet the need to keep writing is a compulsion that refuses to be denied.