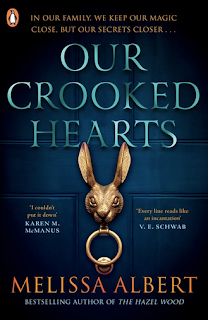 I hadn't heard of Melissa Albert before, but she clearly knows her stuff: Our Crooked Hearts is an accomplished, assured young adult fantasy which is also a mother-daughter relationship drama. As cleverly structured as a whodunnit, Our Crooked Hearts switches between 'right now,' from the daughter's point of view, and 'back then' where we hear the story of her mother's experiments in magic in her own teenage years. Naturally, something dangerous from that past has returned, but the turns of the plot and the discovery of secrets were satisfyingly twisty and kept me hooked right up to the end.

I particularly enjoyed the mother-daughter dynamic, which started out all grumpy-daughter-complains-that-her-mum-doesn't-understand-her, but ended up being really painful and poignant as the reasons behind that estrangement were gradually revealed and resolved. The magic was thoroughly grounded and -- I want to say realistic? Sometimes magic in fantasy can be a bit wifty-wafty, but this felt gritty and edgy. The supportive men characters were another unexpected bonus in a book dominated by women's power, and women's friendship.

Our Crooked Hearts is a really terrific read.