A City of Bells 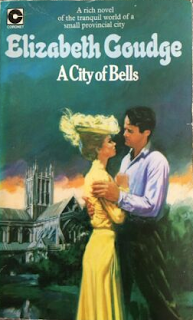 A City of Bells was one of the four Elizabeth Goudge novels I pounced on in a second hand bookshop with a cry of delight a few weeks ago -- all Coronet editions from the 1970s, all with terrible covers. You would think from this image that it's a time travel story, as the woman is all decked out in Edwardian gear but the man is pure 1970s Mills & Boon. Presumably they are supposed to be Felicity and Jocelyn, though neither of them appear as described in the book: Felicity is supposed to have short golden hair, for one thing (admittedly quite unusual in Edwardian England, but whatever...)

As I began re-reading A City of Bells, it seemed more and more familiar. I think this was a novel that I read many times in high school, and it was comfort reading even then. The scenes in peaceful Torminster, Jocelyn's bookshop, and the characters of the children, were especially vivid -- the parts in London and the theatre, and the transformation of Ferranti's poem into a play, all seem a bit contrived to me now. Goudge is pretty hopeless at romantic/sexual love, and she can be sentimental. But City of Bells is an early work, so I'm prepared to forgive its flaws! And I love pale, sensitive Henrietta, and her adopted brother, the boisterous Hugh Anthony, and the saintly figure of Grandfather, the Canon. (One day I must sit down and work out all the gradations of the Anglican offices, because it's all very confusing.)

A lovely, nostalgic trip down a very English memory lane.