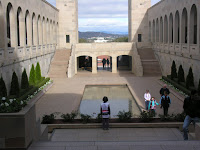 Last weekend we went to Canberra. Canberra really knows how to do winter. Even when it's not actually raining, it's bone-freezing cold. We had a fabulous time, taking in the War Memorial (twice), a great game of football at an old-fashioned oval, the National Gallery and Questacon, as well as visiting an old mate of mine who has created an inspiring eco-garden in the suburbs, complete with reed-beds to filter her grey water and a dry creek bed that flows after heavy rain. She also grows delicious home-grown strawberries that explode with flavour. Mmm.

In other news, the Urgent Secret Collaborative Project is now finished! At least, the main creative part is finished; we still have to go through it together and tidy it up, but the writing is substantially done. Penni and I both felt a bit teary when it was done, and reluctant to let it go. Pen's blogging about it today so I won't say much more, but it was the most fun I've had writing for a long time. Though I'm looking forward to getting my friend back - for some reason, while we were communicating via the novel, we almost stopped communicating via other means. The less we spoke to each other, the better the writing went. Maybe we had to stay in character? Anyway, it was certainly an unintended consequence.

Ridiculous Footy Comment of the Week (2)
"The fans are among the most important stakeholders in the game."
- Caroline Wilson, Footy Classified, 1/6/09
Among the most important stakeholders? Gee, thanks for conceding that. If a tree falls in the forest and no one hears it, does it make a sound? If a ball is kicked and no one's watching, is it a goal?
Posted by A latte beckons at 9:50 AM