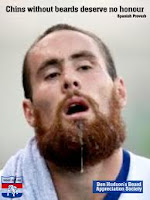 For those of you who are not aware, Ben Hudson, the magnificent ruckman of the Western Bulldogs, is the official Guardian of The People's Beard, and what a beard it is.

That's right, you too can come along to the Western Bulldogs v Essendon game on Saturday night, buy a beard (and wear it!) and raise money to support the sterling work of Tweddle, an early parenting centre located in Footscray, right near the Whitten Oval, who assist parents with young children who need support.

(And hoorah for the very very clever First Dog on the Moon, whose brainchild this event is.)

* Let's hope the Bulldogs are all over the flu by then. Imagine having the flu, then being asked to go out and play four quarters of grinding football, like they did last Sunday. In the pouring rain. In Adelaide. Jeez, those boys are tough! And they won!!
Posted by A latte beckons at 10:48 AM