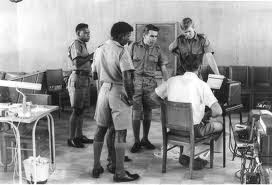 Colonial Days
As a teenager, I had a brief obsession with the British Raj. It was probably sparked by the screening of The Jewel In The Crown,  a lavish British mini-series (well, it was lavish for the 80s!) set in India in the last days of colonialism, and based on the Raj Quartet novels by Paul Scott, which I duly devoured, along with the poignant Staying On. It seemed to me to be a romantic, tragic, exotic period of history, tinged with melancholy yearning.

Once I arrived at university I was quickly disabused of the notion that there was anything romantic about colonial oppression. But it wasn't easy to abandon my fascination with the Raj and its casualties on both sides of the colonial fence.

What didn't occur to me until recently (well, yesterday, if you must know) was that my fascination with the Indian Raj was almost certainly related to my own experience as a member of a colonising power: the Australians in Papua New Guinea.

Most Australians aren't conscious that Australia was ever a colonial power. We don't think of ourselves as imperialists. And yet for seventy years, generations of administrators, bureaucrats and patrol officers ruled the Territory. Most were conscientious, most were paternalistic, some were brutal. Many loved this beautiful, exotic, secretive country more dearly than their own. Expatriate society in New Guinea was its own doomed little world, just like the British Raj, and when Independence came to PNG, there were many Australians set drift, lost between two cultures and unable to fit comfortably into either.

This is the world of Independence, my current work in progress. It's a hard novel to write because I feel so ambivalent about the undeniable costs of exercising colonial power, and the smaller, personal cost to those individuals caught in the machinery when it grinds to a halt, as it inevitably must. All those stories deserve to be told.
Posted by A latte beckons at 10:02 AM