Cloud Atlas In The Clouds 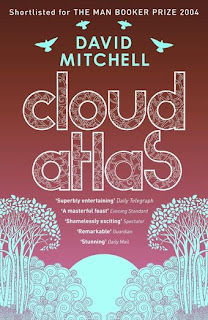 A stranger recommended this book to me a few months ago, when I was on tour in the Wimmera. But it wasn't until I went to Perth that I got around to buying it on the Kindle (on the Kindle? for the Kindle?) to read on the plane.

As it turned out, I ended up watching TV on the plane, but I read half the book while I was in WA. And it's every bit as extraordinary as the kind stranger in St Arnaud had said. It's actually six stories cleverly spliced together, spiralling outward and then in again to finish where it began, but threading common themes and recurring images to reinforce the idea that we are all woven together across time and space. The stories range from a nineteenth century traveller's diary in the Pacific Islands; to the letters of a dissolute young composer in the 1930s; to a 1970s political thriller with a feisty heroine; to the travails in our own time of an elderly publisher trapped against his will in an old people's home that's more like a gulag; to a chilling but recognisable future of corporate dictatorship and genetic manipulation; to a post-apocalyptic adventure where civilization as we know it has all but broken down into chaos and despair, but where courage and intelligence can still win a victory of sorts. David Mitchell has written each portion of the book in a different, totally distinctive voice, the languages of past and future brilliantly playful.

There is, of course, a movie of this book out at the moment, and I ended up watching that movie on the way home, even though I was only halfway through the book. Spoilers everywhere, and the film didn't quite pull off the dazzling virtuosity of the novel, though I enjoyed the conceit of having the same group of actors play different roles in each section of the story. Also, Ben Wishaw was in it! So that was a bonus. But the film differed quite a bit from the book in the way it resolved the storylines, so it wasn't completely spoilery.

It wasn't until I was reading the reviews at the back of the book that I realised that in print form, Cloud Atlas is 500 pages long!! Bloody Kindle. It tells you what percentage of the book you've read, but it completely disguises the ACTUAL length of what you're reading. No wonder it took me nearly two weeks to finish.