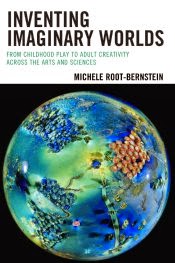 I bought this on the Kindle as part of my on-going research for a possible future project (still mulling…)   The full title is Inventing Imaginary Worlds: From Childhood Play to Adult Creativity Across the Arts and Sciences. Michele Root-Bernstein argues that imaginative worldplay should be encouraged as a means of promoting creativity, not just for writers and artists, but scientists, inventors, social scientists and others, and she details many case studies where successful practitioners in the latter fields report having created imaginary worlds as children and adolescents. She sometimes stretches her definitions of 'worldplay' quite far, including imaginary baseball leagues, for example, but it's still an interesting, and encouraging, thesis. Refreshingly, she doesn't condemn computer play out of hand, recognising that participation in a shared imaginary world is often part of the appeal of such activity; but she is also aware that technology will need to progress before children can take full advantage of the potential for world-building online without adult intervention. (Minecraft, which she doesn't discuss, is surely a step in the right direction.)
What I would have liked was more detail about the actual worlds her interview subjects invented, but Root-Bernstein was more interested in the implications of their play for their adult lives; which is fair enough.

(I'm going to start calling these posts 'book responses' rather than 'reviews', because I think reviews demand a more considered, critical and thoughtful analysis than I have time to prepare -- these posts are just a gut-feel reaction, really.)
Posted by A latte beckons at 9:01 AM