The Boy In The Striped Pyjamas 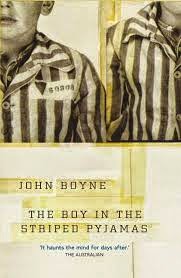 Years ago, I read a discussion of John Boyne's The Boy in the Striped Pyjamas on the blog of my American editor, Cheryl Klein, in which she stated that she hated this book 'with the white-hot loathing of a thousand suns.' It's possible that this prejudiced me; Cheryl is a woman's whose opinion I greatly respect. But seriously, now I've read it for myself, I can confidently state that it really is that bad.

This is not a book written for children; it's written for very stupid people. Bruno is supposed to be nine (ten, by the end), but his level of understanding is about that of a four year old. He's the son of a Nazi commandant who has never heard the word Jew, or Fatherland, or Fuhrer. He calls Hitler 'the Fury', which is 'cute' in a really inappropriate way, and ignores the fact that German and English are completely different languages. In fact the whole book is written in this coy, cutesy way, presumably to highlight Bruno's innocence and naivety; but it's just irritating, and trivialises the dreadful facts of the death camps by pretending that the events of the story could ever have occurred, even in a 'fable.' Also (spoiler alert) I find it really disturbing that the shock ending is (presumably) intended to upset us more than the actual horrific reality.

I could go on, but I'll save it for book group, which is the reason I read it. Should be an interesting discussion...
Posted by A latte beckons at 3:23 PM