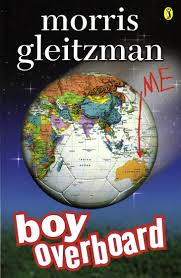 This was my second reading of Morris Gleitzman's Boy Overboard, and I must admit, I probably wouldn't have gone back to it if we hadn't been reading it for my book group. The story is told through the eyes of Jamal, who comes across as an average, very naive, soccer-mad Aussie boy, except that he's living in Afghanistan. Jamal's parents are in trouble with the government, and soon the family are on the run, at the mercy of people smugglers, pirates and the goodwill of the Australian government, seeking asylum in Australia.

Morris Gleitzman deserves nothing but praise for his willingness to tackle controversial issues (this book was published in 2002, when the refugee problem was just beginning to raise its head in this country) and to present them in ways that are very accessible for his target audience. I think this book would work extremely well as a read-aloud to a classroom of middle or upper primary kids, who would probably relate to Jamal as an ordinary kid no different from themselves (if slightly dumber). The story certainly encourages a compassionate view of asylum seekers, which is something we need more of at the moment.

But… for an adult, it's a frustrating read. Jamal's ignorance, and the antics of his little sister Bibi, who seems determined to get herself shot by picking inappropriate fights with authority at any given moment, become grating pretty quickly. And Gleitzman's choppy style -- short, punchy sentences, misunderstandings on every page -- also became a bit wearing. But this book is not intended for me, and it seems to have been a hit with its target audience. Gleitzman definitely knows how to write for primary kids, and he writes about subjects that they need to know about. So there is room on my bookshelf for Boy Overboard.
Posted by A latte beckons at 2:38 PM