Speechless: My Recovery From Stroke 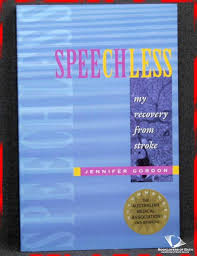 I stumbled on Jennifer Gordon's memoir Speechless: My Recovery From Stroke while I was browsing on Brotherhood Books. It's a slim volume but hugely informative, and though it was written in 1990, I found it incredibly useful and insightful about the effects of stroke.

It's almost exactly two months since my father had a massive stroke which has robbed him of his speech, and movement on the right side of his body. Jennifer Gordon's stroke was much less severe physically than my dad's, but her loss of speech and concentration was profound (during the course of the book she achieves a good, though not complete, recovery). My mother and I have both read it, and found her descriptions of the lived experience of stroke really helpful in trying to understand what life is like for Dad now -- the intense fatigue, the loss of concentration, loss of meaning in concepts even when superficial understanding still exists ('months' no longer had meaning for her, and she couldn't string together her memories in a meaningful sequence), the emotional lability and easy tears.

Of course, every individual is different -- one thing that troubled Jennifer Gordon greatly was the loss of her sense of humour, something which Dad certainly hasn't suffered. He is easily moved to tears, but he is equally quick to roar with laughter. In a strange way, he is more emotionally accessible to us now than he was before the stroke. I wonder if on some level, being freed from all the daily responsibilities and petty worries of his previous life has freed him up to enjoy small pleasures (cake, company, completing a jigsaw) in an uncomplicated, wholehearted way -- it would be nice to think there is some silver lining to this dreadful transformation. But he is still making progress, and having read about Gordon's experience of 'brain clicks' where she would make a sudden leap of progress, many months after the stroke, has helped to bolster our optimism.

We are aiming to get Dad to come home for Christmas; and if Jennifer Gordon could travel to England alone six months after her stroke, why not??
Posted by A latte beckons at 10:50 AM