The Players and the Rebels 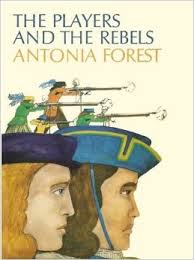 Yes, Antonia Forest AGAIN! I bought this modern reissue, from the excellent Girls Gone By, at considerable expense, as a Christmas present for myself. The Players and the Rebels is actually part two of a pair of books about one of the Marlow family's Elizabethan ancestors, Nick Marlow, who after a series of misadventures, ends up in London working in the theatre as Will Shakespeare's apprentice. I know my school had these books in the library, and I certainly read them, but at the time I preferred the modern family stories and I have only a hazy memory of the plot, so I came to this book almost completely fresh.

As it's part two of two, it took me the first few chapters to reacquaint myself with the cast and adjust to the setting. Antonia Forest researched these books meticulously, but I gather Elizabethan and Shakespearean scholarship has moved on since the 1970s, so some of the details may not be quite accurate, but she brings the world of the theatre, Elizabethan London, and the tangled political situation vividly to life. In this book, Nick and his best friend Humfrey, a page to the Earl of Southampton, get mixed up in a failed rebellion -- a coup that doesn't come off -- and the muddle of the treachery is brilliantly told. But as always in Forest, it's not really the plot that counts, but the network of friendship, hero worship and obligation between the various characters: the debt of patronage between Southampton and Will; the deepening friendship between Will and Nick; the rivalries and jesting, and the bond between the various players; and the subtle shifts in Nicolas's loyalties as he matures and finds himself torn between conflicting duties of love and honour.

The Players and the Rebels is excellent historical fiction, subtle, intelligent and satisfying. I think I got more out of it as an adult, even though it was written for children.

Now I really need to get hold of The Player's Boy and fill myself in with what happened first!
Posted by A latte beckons at 11:40 AM