One Pair of Feet 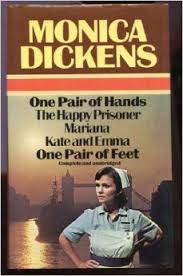 My old mate Brotherhood Books has come up trumps again with this compendium of five novel/memoirs from Monica Dickens, for the very reasonable price of $12.50, delivered to my door less than 24 hours after ordering (how do they do it??)

I started at the back first, with Dickens' nursing memoir, One Pair of Feet, first published in 1946. In the last twelve months I have had more experience with the health system than ever in my life before, last year as a patient and this year as a relative. So I was very interested to read an account from the other side of the screen, so to speak, and Monica Dickens is always amusing. She has a gift for sketching vivid characters very economically (and ruthlessly), and the background of this book, wartime Britain, is filled with telling details. The nurses scramble in and out of the bathroom window when they want to pop out for an illicit night off with the local airmen, and there are brief flurries of excitement when her hospital plays host to some evacuated casualties… Expecting victims of bombing raids, they are surely disappointed when the real evacuees arrive -- dull old men from a nursing home, bumped out to make way for the 'real' casualties. And two shot-down German airmen make a brief appearance on the ward and inspire excesses of patriotic disgust, apart from the one nurse who actually falls in love with one of them.

I do love Monica Dicken's breezy and unforgiving take on her fellow creatures, but oh, dear, this book has some horribly causal racism tossed onto the page. The nurses work 'like negro slaves', a burns victim looks like 'a minstrel', one of the airmen is nicknamed 'Nigger' for his curly hair. It's very off-putting, and it's a real shame, because the rest of the book is good value. I suppose it sheds instructive light on the habits of the times...
Posted by A latte beckons at 1:12 PM