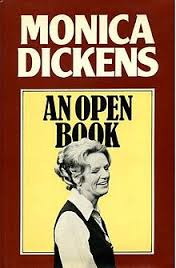 I seem to have had a Monica Dickens mini-readathon. From One Pair of Feet, I progressed to her autobiography, An Open Book, written when she was in her sixties. She describes the background, inspiration and research she undertook for many of her novels. It was intriguing to read that One Pair of Feet made her a pariah in the nursing profession! She was unable to get another nursing job for a long time, and when she did, the other junior nurses were warned not to mix with her, because she had brought their noble calling into disrepute. Once she learned that after she'd taken a particular practical exam, the examiners were discussing her book, and all agreed that she must have been a rotten nurse. Monica's superior said she felt like telling them, you've just passed her for her Grade III (or whatever it was) and praised her poultices… (or whatever it was!) It was also interesting to discover how much insecurity and self-doubt lay beneath her breezy accounts of working in service, and in nursing. She was nothing like as confident as she makes herself sound -- a reminder that even memoirs are often partly fiction.

After An Open Book, I went back to the compendium and read Kate and Emma, which she wrote after accompanying some social workers on their rounds and seeing the poverty and deprivation and abuse they had to deal with, and the way that cruelty to children can repeat down the generations. Sadly, though this book was set in the sixties, I'm sure that not much has changed (more paperwork for the social workers, probably). Kate and Emma charts the friendship between a magistrate's daughter and a teenager fostered away from her neglectful and abusive parents, and, realistically, it doesn't end well.

Monica Dickens founded the first branch of the Samaritans in the United States, where she moved after her marriage. This was a helpline for the desperate and lonely, which provided just a listening ear, someone to talk to, for people in crisis. I'm not sure if they are active in Australia. There seems to be a branch in WA, but perhaps elsewhere Lifeline fills this niche. I once applied to volunteer for Lifeline, but had to pull out because I was planning to travel overseas and couldn't give the required commitment. Maybe I should look into it again. Listening seems like something I could do.
Posted by A latte beckons at 9:53 AM