First Dog on the Moon 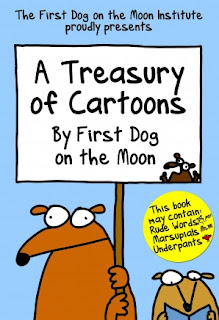 I am a huge fan of First Dog on the Moon. I love his political-marsupial cartoons, which manage to be simultaneously whimsical and searing; I love his weekly Guide to Modern Living on ABC Radio; I love his work as Official Cartoonist of the Western Bulldogs football club. (One of my proudest and most exciting moments was when FD borrowed MY idea for one week's cartoon! True!)

So I was highly chuffed when Santa brought me A Treasury of Cartoons -- a gorgeously fat compendium of First Dog's best work of the past few years (minus the footy cartoons. They are in a separate book. Which I also own.) This is a seriously big book. And it's a strangely useful guide to the political journey our poor, mixed-up country has taken lately -- often shameful, occasionally hilarious. Sometimes only a bandicoot doing interpretive dance can convey the full gamut of weirdness that Australia can produce.

But there are also cartoons in here that are just sweet and sad, mostly the ones involving real dogs (fun fact: First Dog is not an actual dog. He is a human. Think about it: real dogs don't actually care about football teams. Not this much, anyway.) I had to read this book slowly -- there was a fresh emotion on every page: fury, disbelief, delight, shame, laughter. I'm just pleased that the rest of the world seems to be cottoning on to the wonders of First Dog. It's about time.
Posted by A latte beckons at 2:22 PM