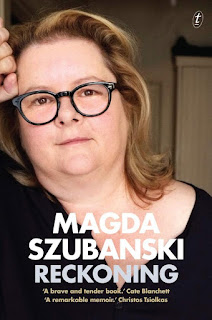 We gave this to my mother-in-law for Christmas and she obligingly finished it quickly and lent it back to us! And I read it quickly too -- took it to the beach and raced through it in a couple of days.

Everyone has raved about Magda Szubanski's autobiography, Reckoning, and no wonder. Even though Magda is best known and loved as a funny lady, she is also clearly very smart, and vulnerable, and it's the latter two traits that come to the fore in this personal history, though there are humorous moments too. It's a family history, too, a struggle to comprehend her father in particular. Szubanski is a wonderful mixture of Scottish and Polish, with a droll, dry Scottish mother and a passionate, yet flint-hard Polish father, who was clearly not the easiest parent.

Szubanski's father was a resistance fighter in Warsaw during World War II -- an assassin, no less. He had to find a way to deal with the terrible burden of the acts he committed during those years, and his family also bore the weight of his past. It took Magda many years to fully understand exactly what her father had done, and the awful toll those deeds had exacted.

But the book also tells Magda's own story, growing up in the Melbourne suburbs, on the fringes of 'sharpie' gangs, escaping to university, working in a women's refuge, struggling with the secret of her sexuality, and her entry into the world of comic performance, which led to her becoming literally Australia's best-loved personality. It must be because, under the brilliant, hilarious characters, we could all sense the insecure, loveable human beneath.

Szubanski is a few years older than me, and her time at Melbourne Uni and living in inner suburban share-houses overlapped with mine. As with Jane Clifton's autobiographical book which I read recently, I was also reading about my own past. But there is much, much more in Reckoning. And if possible, I love Magda even more than I did before.