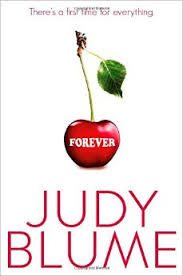 Well, it didn't take me 'forever' to read this book; I raced through it in about a day (ho ho, see what I did there?) My First Tuesday book group are reading Judy Blume's Forever as our first book of the year (the theme is Voice), and I was hopeful of finding it second hand -- no such luck. Maybe everyone is too attached to their copies to discard them? I ended up buying the e-book on my Kindle (first purchase for 2016, that didn't take long...)

I missed the Judy Blume wave as a teen -- realistic books didn't hold much appeal for me, realistic American books even less (sorry, USians), realistic books about boyfriends... yeah, well, nothing there for me. So I was surprised that even though Forever was written over forty years ago, it felt very fresh. Some minor aspects had dated badly -- one allegedly attractive character has long hair and a moustache... actually, maybe that's not dated, though today he'd probably have a hipster beard! The ostensible plot is extremely slight -- girl meets boy, they fall in love, they have sex, they think they'll be in love forever, but they break up. But I was instantly immersed in Kath's life and I barely put the book down. Kath is not a very distinctive character, she is very much an Everygirl, and her emotions, actions and reactions are all fairly predictable. I'm sure this was a deliberate choice on Blume's part, and I'm sure that generations of teenage girls have gained much practical information about sex and relationships from this slim novel.

One thing in particular made me cringe -- both Kath and Michael refer to Michael's penis as 'Ralph.' I can see why Blume made that decision, technically, because they end up talking about Ralph quite a bit. But I hate it when men refer to their penises as a separate entity, as if they aren't responsible for their actions; that's just a bugbear of mine. Also I find it just icky and twee. Wasn't charmed by it in Lady Chatterley's Lover and I didn't like it here either. But anyway...

But apart from that I thought Forever was great: informative, plausible, engaging, and I'd be happy for my daughters to read it. If only there was a subtle way of leaving an e-book lying around the house.
Posted by A latte beckons at 11:18 AM