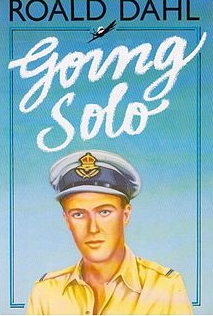 As attentive readers will no doubt recall (!), I recently read the first volume of Roald Dahl's selective memoir/autobiography, Boy, for book group. Because I bought Boy on the Kindle, they threw in the first chapter of the next installment, Going Solo, as a bonus. It wasn't quite enough to entice me to buy the rest, but kind Diana at book group had brought along her copy and generously lent it to me. This is what book groups are great for, the sharing of books - sometimes figuratively and sometimes very literally! Thanks, Diana.

I read Going Solo in one day, more or less, as I was lying ill in bed. It was perfect sick-in-bed reading -- vivid, easy to read, large-ish print, lots of pictures. It covers a particularly eventful few years in Dahl's life -- sent out to East Africa in 1938 to work as a representative of Shell (lots of colourful colonial stories about snakes and lions), then with the declaration of war, training as a fighter pilot, crashing in North Africa and recovering in Egypt, then actually fighting in Greece. Finally the headaches caused by his first crash prevent him from flying any more and he is invalided home.

As in Boy, Dahl is brisk and matter-of-fact about some terrifying situations. He describes with precision and verve how it feels to scrunch up in the cockpit of a fighter (he was well over six feet tall and not well suited to the dimensions of a plane); the exhilaration and dread of air-to-air combat; and the horrific cost of war. As he notes at one point, here is this beautiful machine, his aircraft, which took thousands of hours to build, and in the hands of a barely-trained and inexperienced pilot, it probably won't last five minutes of actual combat... He also notes, along the way, the deaths of many of his fellow pilots and friends.

I can imagine this book going down a treat with young boys who hunger to know exactly what it was like to fly and fight, and nearly die in the desert, without sugar-coating the danger and the cost. Dahl manages to capture both the real excitement and the horror of war in an easily accessible book. I might even persuade my husband to read it. When he was a kid, he would have absolutely loved it.