The Brain That Changes Itself 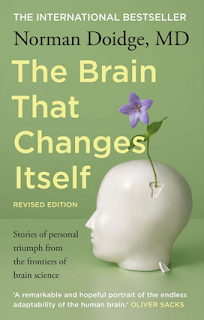 I've been meaning to read The Brain That Changes Itself for ages, especially since Dad had his stroke -- it's very pertinent to the problems he has been facing (partial paralysis and aphasia). It's become a bit of a modern pop-science classic since it was first published in 2007; this was an updated edition from 2010 and I'm sure the science has advanced even further in the last few years.

I think I was expecting more of a focus on stroke treatment, but Norman Doidge covers a range of brain injuries and human issues -- there's one chapter on sexual attraction, and one on psychoanalysis, as well as stroke, OCD, phantom limbs and pain. Doidge's central thesis is that the brain's functioning is not fixed, but is capable of incredible feats of 'plasticity,' adapting and modifying itself to cope with injury, expanding neural networks as we learn and reinforce that learning (as when we learn an instrument or a new language, or as blind people use the parts of the brain normally used for visual processing to enhance their hearing instead.)

I have a weakness for pop-science books and this one was particularly relevant to my interests. Doidge is very encouraging about the human capacity for recovery from brain injury, and we have seen for ourselves the amazing advances that my father has made since his massive stroke 18 months ago. He can now stand steadily, walk for short distances with a quad cane, and has improved his mental processing with the help of brain exercises from our wonderful speech pathologists. (Though I was a bit disconcerted to read in a footnote this morning that there's evidence that people recovering from stroke can improve either their physical movement or their cognitive function -- but there just isn't enough capacity in the undamaged brain to cover both. I don't think I'll be sharing that particular speculation with Dad.)