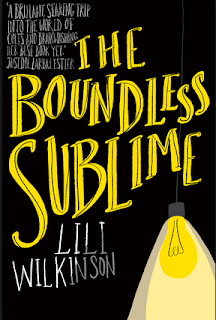 When I was about nineteen, I came pretty close to joining a Christian youth group. Not a cult? I hear you say. But as Ruby's friend reminds her in The Boundless Sublime, Christianity was once regarded as a dangerous cult, and arguably still is (albeit a cult with a huge numbers of adherents). I can well remember that sensation of seductive excitement as I teetered on the edge of joining my potential new friends/'family' -- telling myself that I was too smart to fall for this, but knowing full well that, paradoxically, it's intelligent people who are most vulnerable to joining cult-ish organisations.

In The Boundless Sublime, Ruby is aware of this too, but that doesn't stop her from getting caught up in the weird, disturbing world of the Institute. It helps that she is made vulnerable and isolated by grief over the recent death of her younger brother, which has ripped her family apart; and it also helps that her entry to the Institute is eased by the 'hot wild angel boy' Fox. Before too long, and despite her initial wariness, Ruby has been well and truly taken in -- literally and figuratively. And the way out may be even harder than she thinks...

This is Lili Wilkinson's best book yet, darker and deeper than her previous novels, but no less readable and engaging. Ruby's journey is highly plausible. (Lili has made an accompanying series of videos, Let's Talk About Sects, which my elder daughter highly recommends.) A terrific, disturbing, sinister read.

Oh, and I didn't end up joining the Christian youth group. That particular cult will have to manage without me.