An Anthropologist on Mars 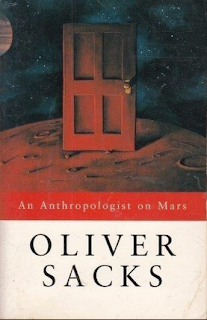 I found An Anthroplogist on Mars at my parents' house -- I'm not sure where it came from. Did I give it to Mum as a present? Or leave it behind on a visit years ago? It was published in 1995, and if I was responsible for bringing it into the house, I can't remember. Oliver Sacks died in 2015, and I was very sad to hear of his passing; I always enjoyed his writing, and I was glad to reacquaint myself with this volume of case studies.

The chapter that I remembered most clearly was the last, on Temple Grandin, the autistic professor of animal science and gifted designer of animal handling equipment. But the other people featured are equally fascinating: a man who has his sight restored after years of blindness, but finds that his brain can't actually learn to see again; an artist who obsessively repaints the lost village of his Tuscan childhood; a surgeon whose Tourette's tics disappear when he operates.

In some ways this book reminded me of The Brain That Changes Itself, though in many cases neuroscience has advanced, as one would expect in twenty years. Sacks does speak of the brain's plasticity, but even I know that research on autism, for example, has developed markedly since this book was first written. But in another way, this book has not dated at all, because Sacks is always interested in his subjects as people, first and foremost. He spends time with them, talks with them, tries to find out what it feels like to experience life the way they do. We enter into their lives, sometimes briefly, sometimes over a period of years, and are left wondering, how would I deal with this situation? What would I make of it? Some people use their challenges to create art, or to invent; others retreat, overwhelmed.

Sacks has written a marvellous combination of science, psychology and reflection on humanity. I must hunt out the books I haven't read.