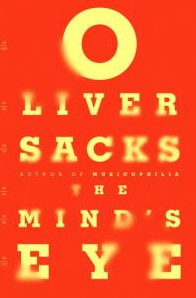 I'm really enjoying my Oliver Sacks binge. These collections of case studies are perfect holiday reading (for me anyway!): the chapters are short, the cases are fascinating (and sometimes poignant), and the subject matter is often relevant to my interests.

To wit*: The Mind's Eye, from 2010, contains a chapter on a woman with aphasia. Like my father, Pat found herself almost completely without spoken language after a stroke; unlike my father (so far), she was eventually able to adapt with the use of a 'Bible' of words which she used to initiate and direct conversations, and also lively use of gesture and mime. My dad is less outgoing than Pat, and while his speech therapists are working on getting him to use an iPad the way Pat used her 'Bible', it's had limited success so far. (Though there was an outstanding victory when we used a message on the iPad to ask the nursing home staff to turn off lights and close a door which had been bothering Dad terribly at bed-time.) Still, we perservere.

There were also chapters on face-blindness, which I have a mild case of, and stereo vision, which I must admit is something I have never given a moment's thought to before. This was a really interesting study of a woman who acquired stereo vision late in life, and was overwhelmed with delight at the experience of perceiving depth for the first time, and seeing objects 'pop out' at her. I had to conclude that my own vision is relatively flat, in that I don't really see much difference between looking through one eye or two -- maybe this is why I've always been so crap at sport, and why I'm such a tentative parker of the car? Also I have a lot of trouble telling whether a goal has gone through at the footy -- all due to my lack of depth perception! It all makes sense now!

All in all, an engrossing read.