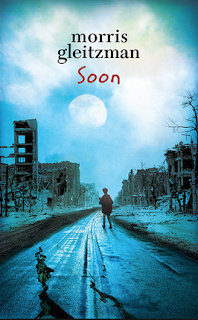 Morris Gleitzman's Soon is the fifth book in what he describes as the 'Felix family' of books: Once, Then, After, Now and now this volume, which is set in the period immediately after the end of the war. But the world is still far from safe for Felix and his friends. Food is scarce, brutal soldiers and partisans are still roaming the streets, and death is around every corner.

Although Soon is firmly written for younger readers, some very dark themes are touched on here -- rape, hate crime, Nazi medical experimentation, murder and genocide. The body count is high, and so is the rate of injury. But Gleitzman keeps the action moving at such a pace, and with enough humour and optimism, that the reader isn't weighed down by the dark content.

Soon won the CBCA Book of the Year for Younger Readers last year, and I suspect that it was a kind of lifetime achievement award for the entire series. I asked Evie if she'd read any of them; she said no, but several of her friends read the first book, Once, last year, in Grade 6. Reviews were mixed -- some loved it, some found it 'boring.' I'm not sure about that verdict -- perhaps what they really meant was confronting, too confronting to fully engage with. And that's fine. But for young readers who are ready to face some of our world's darkest history, this series is a fine introduction.