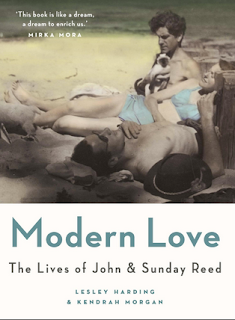 While my aunts were visiting from the UK, Michael and I took them out to visit Heide. I've been there several times before, but strangely never gone inside the original house -- Heide 1 -- or even known that it existed. It just so happened that there was a craft market on the grounds that day, too, so we had plenty to occupy us, as well as the exhibition that I really wanted to see: three female modernist painters, Margaret Preston, Grace Cossington-Smith and Georgia O'Keefe. Wandering the gardens and exploring the house and galleries, we spent an absorbing afternoon. But though I had some vague notions about Heide's famous inhabitants, John and Sunday Reed and their artistic circle, I realised that I knew very few actual facts to satisfy my aunties' curiosity.

Too late for my aunties, but Mum's new friend (via Westgarth) heard that we'd visited Heide and kindly lent me her copy of Modern Love: The Lives of John and Sunday Reed, which I've spent the best part of a week reading (thanks, Myroula!)

Wow, it really is a tangled story, mingling love and bitterness, generosity and venom, friendship and art and tragedy. John and Sunday Reed are usually described as patrons or benefactors of the artists they supported, but they preferred to see themselves as partners and collaborators in the artistic project, especially as their financial support always extended into friendship and often into passion. While these intimate relationships were nourishing for a time, they usually turned sour at some point, and ended up damaging everyone involved.

I was more interested in the first part of the book, which traces most of these early, intense entanglements; the latter part, which described the Melbourne post-war art scene in more detail than I really needed, was less engaging. But I really did learn a lot about Australia's place in the modern art movement, and the lives of many extraordinary people. It's so sad that things worked out tragically for some of the players in the drama (thinking particularly of Sweeney, the Reeds' adopted son, who took his own life in his thirties).

I'm very glad I took the time to read this, and next time I visit Heide, I will see the place with a new, and better informed, eye.