The Real History Behind Foyle's War 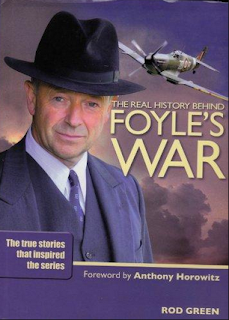 I stumbled across The Real History of Foyle's War by Rod Green while browsing on Brotherhood Books. (I really should shut up about Brotherhood Books and keep it as my own secret, or else all the good stuff will be snapped up before I have a chance to find it!)

Foyle's War is one of our all-time favourite TV series (Michael says it probably is his absolute number one). A beautifully produced murder mystery series set in Hastings during World War II, it has explored all sorts of knotty issues -- espionage, internment, horrific injuries, women's employment, evacuees, the arrival of American troops and subsequent racial tensions -- as well as your everyday black market crimes, conscription dodgers, home grown fascist sympathisers, bombings etcetera. The show features some gorgeously understated acting from Michael Kitchen as Christopher Foyle (he can say more with a single raised eyebrow than with pages of dialogue), his reserved sidekick Milner (whose amputated leg seemed to grow back as the series wore on), wonderfully plummy Sam Stewart (surprisingly, the only character based on a real person!), and Foyle's dashing pilot son Andrew.

I enjoyed this book hugely, even though it finished at the end of season 6 and didn't include the very last of Foyle's post-war adventures, or the end of the war itself. It was a thorough coverage of the general background of crime and police work during the war, as well as detailed episode-by-episode plot descriptions and the origins of those stories in the real world. Lavishly illustrated, this was a hugely enjoyable read.