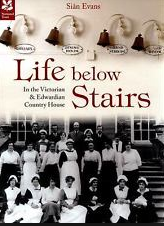 Perhaps as a reaction to spending time "upstairs" recently with Deborah Devonshire, I felt the need for a slight correction, and pulled out Sian Evans' handsomely illustrated Life Below Stairs, a comprehensive introduction to the world of Victorian and Edwardian servants. Published by the National Trust, this book contains loads of photos of country estates and antiquated housekeeping equipment, presumably now under the Trust's care.

Life Below Stairs was produced a year after Downton Abbey started screening in the UK, and I can't help wondering if this was a canny effort to cash in on the success of the show and the fascination with the "backstage" world inhabited by the servants. I wasn't a huge fan of Downton, but I really loved Julian Fellowes' first venture into this dual universe, the movie Gosford Park, which was ever so slightly more realistic than the highly porous class divide depicted in Downton Abbey!

Life Below Stairs would be a valuable resource for anyone writing a book set during this era, as it contains comprehensive and clear lists of the household hierarchy, and all the tasks expected of each member. Domestic service might have provided a certain security, but my God, it was a tough life -- long hours, arduous physical labour, practically no time off, and constantly at the beck and call of others... Hm, not unlike my life at the moment, come to think of it... Except I don't get paid!