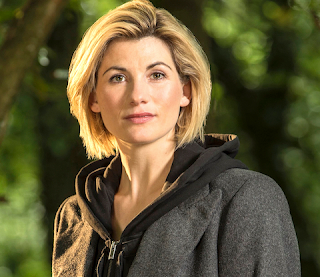 For literally my entire lifetime (longer actually), the part of the Doctor in Doctor Who has been played by a man. To be honest, I was quite happy with that arrangement, particularly when the man was Peter Davison or David Tennant. At first I was resistant to the idea of the Doctor being played by a woman. Dare I say, some aspects of the Doctor's character seemed inherently male -- the self-righteousness, the messiah complex, the evident need for emotional companionship while simultaneously denying that need, the inability to say I love you...

But hey, it's 2017, and I'm learning to move past these gender stereotypes. But I still wasn't sure about the Doctor becoming female. Gradually the show began to hint that such a thing was not just possible, but inevitable -- a line of dialogue here and there, the regeneration of the Master into Missy. I won't say I warmed to the idea, but I was prepared for it.

But as soon as the announcement was made that the luminous Jodie Whittaker was to take the role, I was in. She's wonderful, amazing, an incredible actor. She was fabulous in Broadchurch, and I can't wait to see what she'll bring to the Doctor. Yes, it's a big shake-up, but this is Doctor Who! It's always been about challenging expectations, expanding horizons, questioning assumptions. That's the whole point of the show!

She's here, and I can't believe I ever doubted her.
Posted by A latte beckons at 10:00 AM