Who Is Who? The Philosophy of Doctor Who 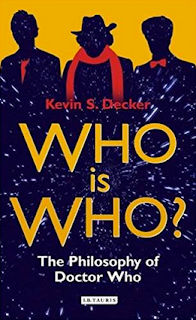 I once wanted to be a philosopher.

It was in the early 80s, when I was in my teens and starting to think about my future -- not very realistically, obviously -- and there was a show on the ABC which I've been unable to pin down, which consisted of interviews with philosophers. I found it absolutely thrilling: the notion that there were people who spent their days wrestling with big, important ideas, that this could actually be a JOB, was incredibly exciting and inspiring.

This ambition withered about six weeks into my first year philosophy course at uni, which was torturously dry and dull, all about Logical Positivism, rather than the meaty questions of ethics and values that I craved. I probably should have done History and Philosophy of Science instead.

And I must admit that I found parts of Kevin S. Decker's Who is Who? somewhat dry, even with the attraction of Doctor Who as source material. Also, it suffered from sloppy editing: for example, a single quote was not only repeated in the first few pages, it was attributed to two different authors!

For the most part, though, this was a fun excursion through questions of identity, political ethics, the nature of knowledge and other philosophical issues through the lens of Doctor Who. I would have liked a discussion of the new Doctor's gender switch and its implications, but alas, this book pre-dates even the Twelfth Doctor, let alone the Thirteenth! But I'm happy to add it to my collection.

And if anyone else remembers that philosophy show, please let me know! I'm starting to think I must have imagined the whole thing.
Posted by A latte beckons at 11:25 AM